After many years of marriage, you’ve decided to leave your wife.  Whether it’s because you are no longer in love, or your wife is the devil incarnate, you’ve decided to get out.  You’ve reached a point in your life where you want to choose happiness over misery and freedom over obligation.

There is just one tiny little obstacle between you and freedom, however: your wife.  Well, your legal obligations to her, that is.

You’ve heard the horror stories: a friend of a friend lost their house, pension and their dog in the divorce.  Your third cousin on your mother’s side must work 3 jobs to pay his ex-wife alimony for the rest of his life.  Your co-worker paid thousands of dollars for an attorney only to end up with a terrible settlement.

While a lot of the horror stories you’ve heard are probably exaggerated, it is true that people do get bad deals in divorce.  This doesn’t have to happen to you!  If you follow a few simple rules, you can get through your divorce without losing everything in the process:

Accept what you can’t change 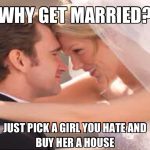 A marriage is a legal partnership.  When two people form a partnership in order to start a business, like a restaurant or a book store, they make certain promises to each other as far as what will happen to the business should the partnership dissolve, usually in the form of a written partnership agreement.  Marriage is kind of the same thing, except most people don’t have a written partnership agreement (i.e. a prenup) in place when they get married.  In those cases, the PA divorce code sets out the parameters for which the marriage can be dissolved, including how assets are divided and whether alimony should be paid. The law is the law, and you can’t change it.

If you and your wife have minor children, and you earn more than her, you are probably going to pay her child support according to a set of statewide guidelines. There is nothing you can do about that because it’s the law. If your wife was a homemaker throughout your marriage, or if your earnings are much higher than your wife’s, and if your ability to earn income and assets in the future are far superior to hers, chances are that your wife is entitled to a skewed distribution of the assets in her favor. That doesn’t mean she will get everything, but she will likely get a little bigger slice of the pie than you.  This is because you have the resources to recover from the financial harm of the divorce more quickly than she does.

Of course, people are free to enter into any settlement agreement they want (as long as there is no fraud, duress, etc.) despite what the divorce code says.  However, both sides need to know what the court would likely order as a starting point in determining how to negotiate a settlement.

Patience is a virtue 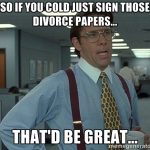 You must accept that the divorce process is a slow one.  If your wife refuses to consent to the divorce, there is nothing you can do about it until you have been separated for an entire year.  If your wife does consent to the divorce, but you have to go through the court process because you can’t reach a settlement with her, that also takes a ton of time.  As much as you want to get things wrapped up, you can’t force your wife or the courts to go at your pace.  Be patient.  You will get there, I promise.

Whoever coined the phrase “hell hath no fury like a woman scorned” must have been a husband in the process of divorcing his wife.

Beware of the crazy wife

If your wife is angry and bitter about the divorce, refrain from engaging her in an argument.  Although uncommon, I’ve seen particularly crazy wives (see devil incarnate reference above) seek revenge by filing a bogus PFA against her husband.  Those bogus claims eventually get cleared up, but not before the client has had to incur a ton of attorney fees to fight it.  Hopefully you already know if you are married to someone who is capable of doing such a horrible thing; if so, you probably should have gotten divorced a long time ago.

For most people, though, fighting with your soon-to-be ex-wife costs money in other ways.  It takes a lot of money to pay a lawyer to fight your battles, so you should choose them wisely.  Plus, anger consumes a remarkable amount of energy. I’ve seen many cases where the one side is so tired of the fighting that they give in to their wife’s unfair demands just to get it over with.

If you can manage to avoid confrontation with your wife, your chances of reaching a favorable settlement without incurring an arm and a leg in attorney fees are much greater.

Be Fair and Insist on Fairness

When you are engaging in settlement negotiations, be fair. If you’ve been married 30 years, and you’ve earned a 6-figure salary for most of it, but your 50-year-old wife has never worked outside of the home, chances are a deal with no alimony is not fair to her.

If you try to be fair, you are more likely to reach an agreement without a lot of back and forth between lawyers, and without going to court, which saves you money.

Don’t be a pansy

On the other hand, if your wife refuses to be fair with you, then don’t be afraid to go to the mattresses.  People tend to think that settling outside of court is always the most cost-effective option, but that isn’t true if settling means you must give in to your wife’s outrageous demands.

The court route involves having a hearing before a judge or a hearing officer who will issue a ruling consistent with the divorce code which does its best to treat people fairly.  You could very well end up doing better in court than you would by agreeing to an unfair settlement and avoiding court. 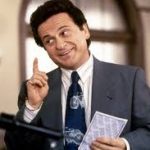 Don’t be stupid. Hire a divorce lawyer.  It boggles my mind how many people try to handle their divorce themselves.  If I changed the brakes on my car because I wanted to avoid paying a mechanic, I’d be in serious trouble.  You might think you are saving money by not hiring a lawyer, but I can tell you with certainty that you are not.

An experienced divorce lawyer will tell you what the law is and what your rights are.  They will advise you during negotiations and tell you whether it is better for you to accept a settlement or go to court.  Although the law may require you to pay child support, a lawyer will make sure you are paying the appropriate amount, and not some ridiculous above-guideline number.  If the law supports a skewed distribution of the assets in your wife’s favor, an experienced divorce lawyer will fight to make sure it is not so heavily skewed as to be prejudicial to you.

There is no doubt that divorce lawyers cost money, but do you know what costs even more money?  Mistakes.  Stupid mistakes made by people who try to handle their divorces themselves.  Every year we get a couple of cases where we have to try to fix mistakes made by a party who tried to represent themselves in their divorce.  Those people always end up incurring way more attorney fees trying to fix the damage they caused themselves than if they had just hired a lawyer in the first place.

If you want to get through your divorce with as little damage to your bottom line as possible, hire an experienced divorce lawyer from the outset.

If you follow these simple rules by accepting what you can’t change, doing your best to be civil, are fair with your ex and if you hire an experienced divorce lawyer, you just might make it through your divorce without completely using your shirt.